A New Aesthetics and Ethics for the Music Industry

Posted on December 31, 1997 by spaceagebachelor

(Note: This essay composed of maxims was originally printed on the back cover of issue 11 of Space Age Bachelor.) 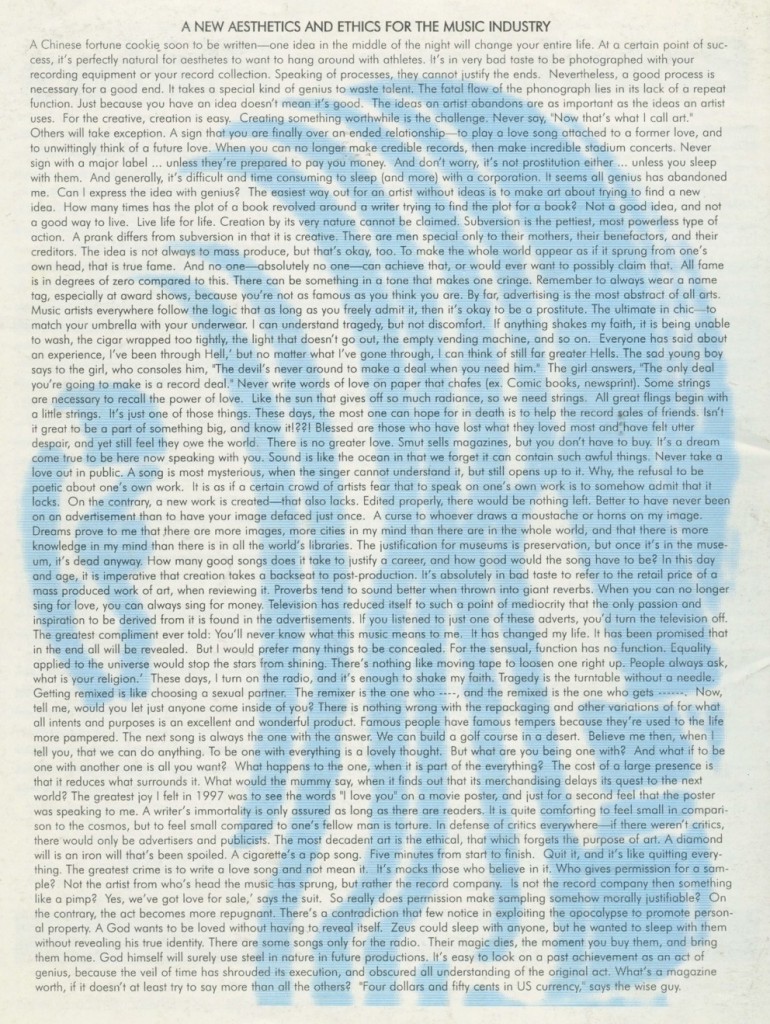 A NEW AESTHETICS AND ETHICS FOR THE MUSIC INDUSTRY

A Chinese fortune cookie soon to be written—one idea in the middle of the night will change your entire life.

At a certain point of success, it’s perfectly natural for aesthetes to want to hang around with athletes.

It’s in very bad taste to be photographed with your recording equipment or your record collection.

Speaking of processes, they cannot justify the ends. Nevertheless, a good process is necessary for a good end.

It takes a special kind of genius to waste talent.

The fatal flaw of the phonograph lies in its lack of a repeat function.

Just because you have an idea doesn’t mean it’s good. The ideas an artist abandons are as important as the ideas an artist uses. For the creative, creation is easy. Creating something worthwhile is the challenge.

Never say, “Now that’s what I call art.” Others will take exception.

A sign that you are finally over an ended relationship—to play a love song attached to a former love, and to unwittingly think of a future love.

When you can no longer make credible records, then make incredible stadium concerts.

Never sign with a major label … unless they’re prepared to pay you money. And don’t worry, it’s not prostitution either … unless you sleep with them. And generally, it’s difficult and time consuming to sleep (and more) with a corporation.

It seems all genius has abandoned me. Can I express the idea with genius? The easiest way out for an artist without ideas is to make art about trying to find a new idea. How many times has the plot of a book revolved around a writer trying to find the plot for a book? Not a good idea, and not a good way to live. Live life for life.

Creation by its very nature cannot be claimed.

Subversion is the pettiest, most powerless type of action. A prank differs from subversion in that it is creative.

There are men special only to their mothers, their benefactors, and their creditors.

The idea is not always to mass produce, but that’s okay, too.

To make the whole world appear as if it sprung from one’s own head, that is true fame. And no one—absolutely no one—can achieve that, or would ever want to possibly claim that. All fame is in degrees of zero compared to this.

There can be something in a tone that makes one cringe.

Remember to always wear a name tag, especially at award shows, because you’re not as famous as you think you are.

By far, advertising is the most abstract of all arts.

Music artists everywhere follow the logic that as long as you freely admit it, then it’s okay to be a prostitute.

The ultimate in chic—to match your umbrella with your underwear.

I can understand tragedy, but not discomfort. If anything shakes my faith, it is being unable to wash, the cigar wrapped too tightly, the light that doesn’t go out, the empty vending machine, and so on. Everyone has said about an experience, I’ve been through Hell,’ but no matter what I’ve gone through, I can think of still far greater Hells.

The sad young boy says to the girl, who consoles him, “The devil’s never around to make a deal when you need him.” The girl answers, “The only deal you’re going to make is a record deal.”

Some strings are necessary to recall the power of love. Like the sun that gives off so much radiance, so we need strings. All great flings begin with a little strings. It’s just one of those things.

These days, the most one can hope for in death is to help the record sales of friends.

Isn’t it great to be a part of something big, and know it!??!

Blessed are those who have lost what they loved most and have felt utter despair, and yet still feel they owe the world. There is no greater love.

Smut sells magazines, but you don’t have to buy.

It’s a dream come true to be here now speaking with you.

Sound is like the ocean in that we forget it can contain such awful things.

Never take a love out in public.

A song is most mysterious, when the singer cannot understand it, but still opens up to it.

Why, the refusal to be poetic about one’s own work. It is as if a certain crowd of artists fear that to speak on one’s own work is to somehow admit that it lacks. On the contrary, a new work is created—that also lacks.

Edited properly, there would be nothing left.

Better to have never been on an advertisement than to have your image defaced just once. A curse to whoever draws a moustache or horns on my image.

The justification for museums is preservation, but once it’s in the museum, it’s dead anyway.

How many good songs does it take to justify a career, and how good would the song have to be?

In this day and age, it is imperative that creation takes a backseat to post-production.

It’s absolutely in bad taste to refer to the retail price of a mass produced work of art, when reviewing it.

Proverbs tend to sound better when thrown into giant reverbs.

When you can no longer sing for love, you can always sing for money.

Television has reduced itself to such a point of mediocrity that the only passion and inspiration to be derived from it is found in the advertisements. If you listened to just one of these adverts, you’d turn the television off.

The greatest compliment ever told: You’ll never know what this music means to me. It has changed my life.

It has been promised that in the end all will be revealed. But I would prefer many things to be concealed.

For the sensual, function has no function.

Equality applied to the universe would stop the stars from shining.

There’s nothing like moving tape to loosen one right up.

People always ask, what is your religion.’ These days, I turn on the radio, and it’s enough to shake my faith.

Tragedy is the turntable without a needle.

There is nothing wrong with the repackaging and other variations of for what all intents and purposes is an excellent and wonderful product.

Famous people have famous tempers because they’re used to the life more pampered.

The next song is always the one with the answer.

We can build a golf course in a desert. Believe me then, when I tell you, that we can do anything.

To be one with everything is a lovely thought. But what are you being one with? And what if to be one with another one is all you want? What happens to the one, when it is part of the everything? The cost of a large presence is that it reduces what surrounds it.

What would the mummy say, when it finds out that its merchandising delays its quest to the next world?

The greatest joy I felt in 1997 was to see the words “I love you” on a movie poster, and just for a second feel that the poster was speaking to me.

A writer’s immortality is only assured as long as there are readers.

In defense of critics everywhere—if there weren’t critics, there would only be advertisers and publicists.

The most decadent art is the ethical, that which forgets the purpose of art.

A diamond will is an iron will that’s been spoiled.

A cigarette’s a pop song. Five minutes from start to finish. Quit it, and it’s like quitting everything.

The greatest crime is to write a love song and not mean it. It’s mocks those who believe in it.

Who gives permission for a sample? Not the artist from who’s head the music has sprung, but rather the record company. Is not the record company then something like a pimp? Yes, we’ve got love for sale,’ says the suit. So really does permission make sampling somehow morally justifiable? On the contrary, the act becomes more repugnant.

There’s a contradiction that few notice in exploiting the apocalypse to promote personal property.

A God wants to be loved without having to reveal itself. Zeus could sleep with anyone, but he wanted to sleep with them without revealing his true identity.

There are some songs only for the radio. Their magic dies, the moment you buy them, and bring them home.

God himself will surely use steel in nature in future productions.

It’s easy to look on a past achievement as an act of genius, because the veil of time has shrouded its execution, and obscured all understanding of the original act.

What’s a magazine worth, if it doesn’t at least try to say more than all the others? “Four dollars and fifty cents in US currency,” says the wise guy.

This entry was posted in Essay and Manifesto, Issue 11. Bookmark the permalink.