Posted on November 23, 1996 by spaceagebachelor 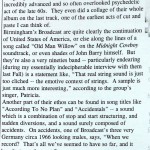 (Editor’s Note: I interviewed Broadcast backstage in Birmingham in the fall of 1996, following a gig in which they’d opened for Pram. There was a great deal of noiise, since we were talking fairly casually in the middle of a party; thus, most of the interview tape was indecipherable. I liked their work a lot, but the SAB magazine was already nearing its final issue before Broadcast’s albums started coming out. Hence, this is the only SAB interview with Broadcast, albeit brief.)

Broadcast will likely be a name everywhere before the ﬁnish of this year. They come from Birmingham, and so far they’ve done one single with Wurlitzer Jukebox, and two with Duophone. They have a mini-Lp due out on Warp in June of this year, and a big US indie label is soon to be releasing a singles compilation introducing them to North America. Thirty odd years ago America was not ready for the group that bore its name, United States of America, an incredibly advanced and so often overlooked psychedelic act of the late 60s. They even did a collage of their whole album on the last track, one of the earliest acts of cut and paste I can think of.

Birmingham’s Broadcast are quite clearly the continuation of United States of America, or else along the lines of a song called “Old Man Willow” on the Midnight Cowboy soundtrack, or even shades of John Barry himself. But they’re also a very nineties band — particularly endearing (during my essentially indecipherable interview with them last Fall) is a statement like, “That real string sound is just too cliched — the emotive context of strings. A sample is just much more interesting,” according to the group’s singer, Patricia.

Another part of their ethos can be found in song titles like “According To No Plan” and “Accidentals” — a sound which is a combination of stop and start structuring, and sudden diversions, and a sound surely composed of accidents. On accidents, one of Broadcast’s three very Germany circa 1966 looking males, says, “When we record? That’s all we’ve seemed to have so far, and it hasn’t stopped us yet.”

The Book Lovers EP, their second on Duophonic, is a strange mix of distorted, decaying strings, rushing psychedlic, prehistoric synth melodies, lonely organ solos, and wide open spaces. The string sound comes clearly from the production of the Wu Tang Clan’s Rza with the
low quality rawness and the choppiness.

This entry was posted in Interview, Issue 10 and tagged broadcast, pram, stereolab, warp. Bookmark the permalink.