Posted on November 20, 1997 by spaceagebachelor

(a review of the Wim Wenders’ film) 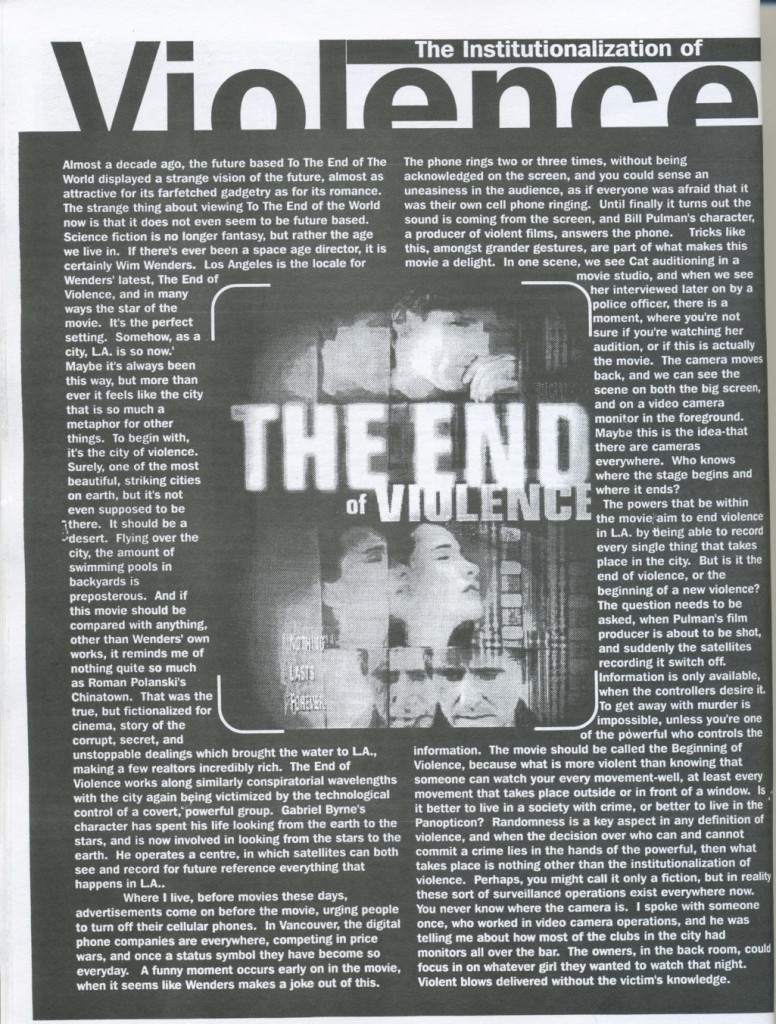 The End of Violence

Almost a decade ago, the future based To The End of The World displayed a strange vision of the future, almost as attractive for its farfetched gadgetry as for its romance. The strange thing about viewing To The End of the World now is that it does not even seem to be future based. Science fiction is no longer fantasy, but rather the age we live in. If there’s ever been a space age director, it is certainly Wim Wenders. Los Angeles is the locale for Wenders’ latest, The End of Violence, and in many ways the star of the movie. It’s the perfect setting. Somehow, as a city, L.A. is so now.’ Maybe it’s always been this way, but more than ever it feels like the city that is so much a metaphor for other things. To begin with, it’s the city of violence. Surely, one of the most beautiful, striking cities on earth, but it’s not even supposed to be there. It should be a desert. Flying over the city, the amount of swimming pools in backyards is preposterous. And if this movie should be compared with anything, other than Wenders’ own works, it reminds me of nothing quite so much as Roman Polanski’s Chinatown. That was the true, but fictionalized for cinema, story of the corrupt, secret, and unstoppable dealings which brought the water to L.A., making a few realtors incredibly rich. The End of Violence works along similarly conspiratorial wavelengths with the city again being victimized by the technological control of a covert, powerful group. Gabriel Byrne’s character has spent his life looking from the earth to the stars, and is now involved in looking from the stars to the earth. He operates a centre, in which satellites can both see and record for future reference everything that happens in L.A..

Where I live, before movies these days, advertisements come on before the movie, urging people to turn off their cellular phones. In Vancouver, the digital phone companies are everywhere, competing in price wars, and once a status symbol they have become so everyday. A funny moment occurs early on in the movie, when it seems like Wenders makes a joke out of this. The phone rings two or three times, without being acknowledged on the screen, and you could sense an uneasiness in the audience, as if everyone was afraid that it was their own cell phone ringing. Until finally it turns out the sound is coming from the screen, and Bill Pulman’s character, a producer of violent films, answers the phone. Tricks like this, amongst grander gestures, are part of what makes this movie a delight. In one scene, we see Cat auditioning in a movie studio, and when we see her interviewed later on by a police officer, there is a moment, where you’re not sure if you’re watching her audition, or if this is actually the movie. The camera moves back, and we can see the scene on both the big screen, and on a video camera monitor in the foreground. Maybe this is the idea—that there are cameras everywhere. Who knows where the stage begins and where it ends?

The powers that be within the movie aim to end violence in L.A. by being able to record every single thing that takes place in the city. But is it the end of violence, or the beginning of a new violence? The question needs to be asked, when Pulman’s film producer is about to be shot, and suddenly the satellites recording it switch off. Information is only available, when the controllers desire it. To get away with murder is impossible, unless you’re one of the powerful who controls the information. The movie should be called the Beginning of Violence, because what is more violent than knowing that someone can watch your every movement—well, at least every movement that takes place outside or in front of a window. Is it better to live in a society with crime, or better to live in the Panopticon? Randomness is a key aspect in any definition of violence, and when the decision over who can and cannot commit a crime lies in the hands of the powerful, then what takes place is nothing other than the institutionalization of violence. Perhaps, you might call it only a fiction, but in reality these sort of surveillance operations exist everywhere now. You never know where the camera is. I spoke with someone once, who worked in video camera operations, and he was telling me about how most of the clubs in the city had monitors all over the bar. The owners, in the back room, could focus in on whatever girl they wanted to watch that night. Violent blows delivered without the victim’s knowledge.

This entry was posted in Film, Issue 11. Bookmark the permalink.