Posted on November 22, 1997 by spaceagebachelor

(This was published in issue 11 of Space Age Bachelor. This is a re-tweaked version of an article which originally appeared in Eye Weekly.) 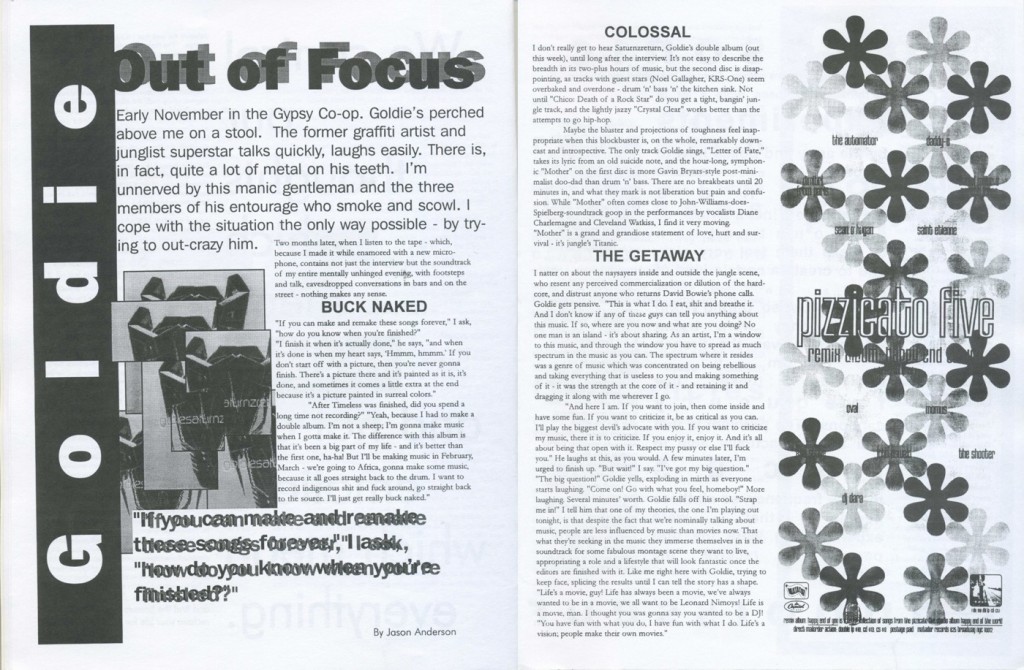 Early November in the Gypsy Co-op. Goldie’s perched above me on a stool. The former graffiti artist and junglist superstar talks quickly, laughs easily. There is, in fact, quite a lot of metal on his teeth. I’m unnerved by this manic gentleman and the three members of his entourage who smoke and scowl. I cope with the situation the only way possible – by trying to out-crazy him.

Two months later, when I listen to the tape – which, because I made it while enamored with a new microphone, contains not just the interview but the soundtrack of my entire mentally unhinged evening, with footsteps and talk, eavesdropped conversations in bars and on the street – nothing makes any sense.

“If you can make and remake these songs forever,” I ask, “how do you know when you’re finished?”

“I finish it when it’s actually done,” he says, “and when it’s done is when my heart says, ‘Hmmm, hmmm.’ If you don’t start off with a picture, then you’re never gonna finish. There’s a picture there and it’s painted as it is, it’s done, and sometimes it comes a little extra at the end because it’s a picture painted in surreal colors.”

“After Timeless was finished, did you spend a long time not recording?”

“Yeah, because I had to make a double album. I’m not a sheep; I’m gonna make music when I gotta make it. The difference with this album is that it’s been a big part of my life – and it’s better than the first one, ha-ha! But I’ll be making music in February, March – we’re going to Africa, gonna make some music, because it all goes straight back to the drum. I want to record indigenous shit and fuck around, go straight back to the source. I’ll just get really buck naked.”

I don’t really get to hear Saturnzreturn, Goldie’s double album (out this week), until long after the interview. It’s not easy to describe the breadth in its two-plus hours of music, but the second disc is disappointing, as tracks with guest stars (Noel Gallagher, KRS-One) seem overbaked and overdone – drum ‘n’ bass ‘n’ the kitchen sink. Not until “Chico: Death of a Rock Star” do you get a tight, bangin’ jungle track, and the lightly jazzy “Crystal Clear” works better than the attempts to go hip-hop.

Maybe the bluster and projections of toughness feel inappropriate when this blockbuster is, on the whole, remarkably downcast and introspective. The only track Goldie sings, “Letter of Fate,” takes its lyric from an old suicide note, and the hour-long, symphonic “Mother” on the first disc is more Gavin Bryars-style post-minimalist doo-dad than drum ‘n’ bass. There are no breakbeats until 20 minutes in, and what they mark is not liberation but pain and confusion. While “Mother” often comes close to John-Williams-does-Spielberg-soundtrack goop in the performances by vocalists Diane Charlemagne and Cleveland Watkiss, I find it very moving. “Mother” is a grand and grandiose statement of love, hurt and survival – it’s jungle’s Titanic.

I natter on about the naysayers inside and outside the jungle scene, who resent any perceived commercialization or dilution of the hardcore, and distrust anyone who returns David Bowie’s phone calls. Goldie gets pensive. “This is what I do. I eat, shit and breathe it. And I don’t know if any of these guys can tell you anything about this music. If so, where are you now and what are you doing? No one man is an island – it’s about sharing. As an artist, I’m a window to this music, and through the window you have to spread as much spectrum in the music as you can. The spectrum where it resides was a genre of music which was concentrated on being rebellious and taking everything that is useless to you and making something of it – it was the strength at the core of it – and retaining it and dragging it along with me wherever I go.

He laughs at this, as you would. A few minutes later, I’m urged to finish up. “But wait!” I say. “I’ve got my big question.” “The big question!” Goldie yells, exploding in mirth as everyone starts laughing. “Come on! Go with what you feel, homeboy!” More laughing. Several minutes’ worth. Goldie falls off his stool. “Strap me in!”

I tell him that one of my theories, the one I’m playing out tonight, is that despite the fact that we’re nominally talking about music, people are less influenced by music than movies now. That what they’re seeking in the music they immerse themselves in is the soundtrack for some fabulous montage scene they want to live, appropriating a role and a lifestyle that will look fantastic once the editors are finished with it. Like me right here with Goldie, trying to keep face, splicing the results until I can tell the story has a shape.

This entry was posted in Issue 11 and tagged goldie. Bookmark the permalink.