Posted on September 27, 1997 by spaceagebachelor 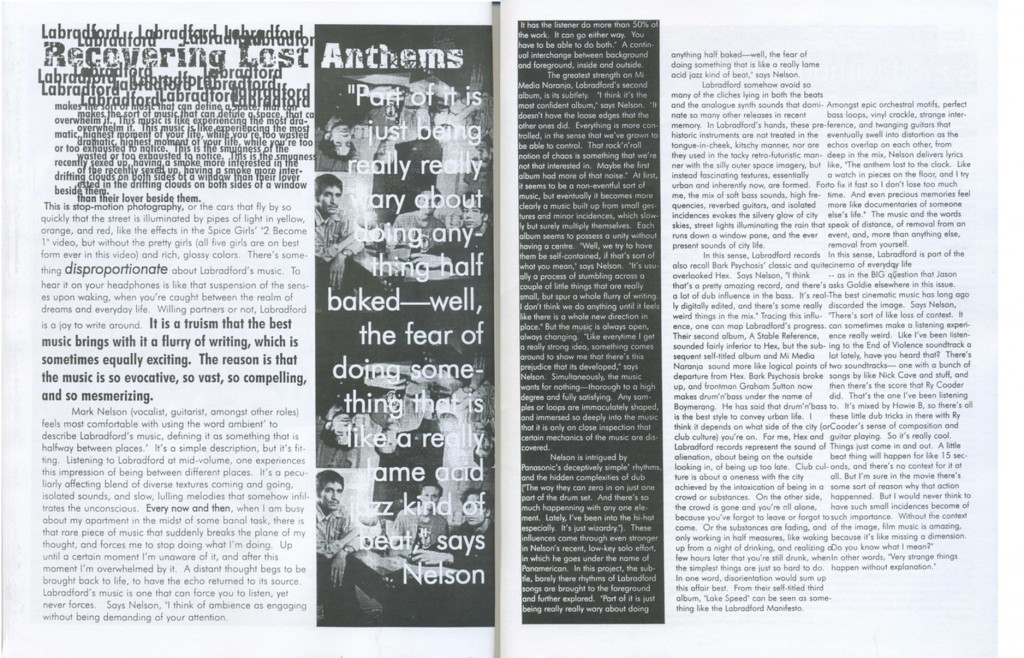 Labradford makes the sort of music that can define a space, that can overwhelm it. This music is like experiencing the most dramatic, highest moment of your life, while you’re too wasted or too exhausted to notice. This is the smugness of the recently sexed up, having a smoke more interested in the drifting clouds on both sides of a window than their lover beside them. This is stop-motion photography, or the cars that fly by so quickly that the street is illuminated by pipes of light in yellow, orange, and red, like the effects in the Spice Girls’ “2 Become 1″ video, but without the girls and the rich, glossy colors. There’s something disproportionate about Labradford’s music. To hear it on your headphones is like that suspension of the senses upon waking, when you’re caught between the realm of dreams and everyday life. Willing partners or not, Labradford is a joy to write around. It is a truism that the best music brings with it a flurry of writing, which is sometimes equally exciting. The reason is that the music is so evocative, so vast, so compelling, and so mesmerizing.

Mark Nelson (vocalist, guitarist, amongst other roles) feels most comfortable with using the word ‘ambient’ to describe Labradford’s music, defining it as something ‘that is halfway between places.’ It’s a simple description, but it’s fitting. Listening to Labradford at mid-volume, one experiences this impression of being between different places. It’s a peculiarly affecting blend of diverse textures coming and going, isolated sounds, and slow, lulling melodies that somehow infiltrates the unconscious. Every now and then, when I am busy about my apartment in the midst of some banal task, there is that rare piece of music that suddenly breaks the plane of my thought, and forces me to stop doing what I’m doing. Up until a certain moment I’m unaware of it, and after this moment I’m overwhelmed by it. A distant thought begs to be brought back to life, to have the echo returned to its source. Labradford’s music is one that can force you to listen, yet never forces. Says Nelson, “I think of ambience as engaging without being demanding of your attention. It has the listener do more than 50% of the work. It can go either way. You have to be able to do both.” A continual interchange between background and foreground, inside and outside.

The greatest strength on Mi Media Naranja, Labradford’s second album, is its subtlety. “I think it’s the most confident album,” says Nelson. “It doesn’t have the loose edges that the other ones did. Everything is more controlled, in the sense that we’ve grown to be able to control. That rock’n’roll notion of chaos is something that we’re not that interested in. Maybe the first album had more of that noise.” At first, it seems to be a non-eventful sort of music, but eventually it becomes more clearly a music built up from small gestures and minor incidences, which slowly but surely multiply themselves. Each album seems to possess a unity without having a centre. “Well, we try to have them be self-contained, if that’s sort of what you mean,” says Nelson. “It’s usually a process of stumbling across a couple of little things that are really small, but spur a whole flurry of writing. I don’t think we do anything until it feels like there is a whole new direction in place.” But the music is always open, always changing. “Like every time I get a really strong idea, something comes around to show me that there’s this prejudice that its developed,” says Nelson. Simultaneously, the music wants for nothing — thorough to a high degree and fully satisfying. Any samples or loops are immaculately shaped, and immersed so deeply into the music that it is only on close inspection that certain mechanics of the music are discovered.

Nelson is intrigued by Panasonic’s ‘deceptively simple’ rhythms, and the hidden complexities of dub (“The way they can zero in on just one part of the drum set. And there’s so much happening with any one element. Lately, I’ve been into the hi-hat especially. It’s just wizardry.”). These influences come through even stronger in Nelson’s recent, low-key solo effort, in which he goes under the name of Panamerican. In this project, the subtle, barely there rhythms of Labradford songs are brought to the foreground and further explored. “Part of it is just being really really wary about doing anything half baked — well, the fear of doing something that is like a really lame acid jazz kind of beat,” says Nelson.

Labradford somehow avoid so many of the cliches lying in both the beats and the analogue synth sounds that dominate so many other releases in recent memory. In Labradford’s hands, these prehistoric instruments are not treated in the tongue-in-cheek, kitschy manner, nor are they used in the tacky retro-futuristic manner with the silly outer space imagery, but instead fascinating textures, essentially urban and inherently now, are formed. For me, the mix of soft bass sounds, high frequencies, reverbed guitars, and isolated incidences evokes the silvery glow of city skies, street lights illuminating the rain that runs down a window pane, and the ever present sounds of city life.
In this sense, Labradford records also recall Bark Psychosis’ classic and quite overlooked Hex. Says Nelson, “I think that’s a pretty amazing record, and there’s a lot of dub influence in the bass. It’s really digitally edited, and there’s some really weird things in the mix.” Tracing this influence, one can map Labradford’s progress. Their second album, A Stable Reference, sounded fairly inferior to Hex, but the subsequent self-titled album and Mi Media Naranja  sound more like logical points of departure from Hex. Bark Psychosis broke up, and frontman Graham Sutton now makes drum’n’bass under the name of Boymerang. He has said that drum’n’bass is the best style to convey urban life. I think it depends on what side of the city (or club culture) you’re on. For me, Hex and Labradford records represent the sound of alienation, about being on the outside looking in, of being up too late. Club culture is about a oneness with the city achieved by the intoxication of being in a crowd or substances. On the other side, the crowd is gone and you’re all alone, because you’ve forgot to leave or forgot to come. Or the substances are fading, and only working in half measures, like waking up from a night of drinking, and realizing a few hours later that you’re still drunk, when the simplest things are just so hard to do.

In one word, disorientation would sum up this affair best. From their self-titled third album, “Lake Speed” can be seen as something like the Labradford Manifesto. Amongst epic orchestral motifs, perfect bass loops, vinyl crackle, strange interference, and twanging guitars that eventually swell into distortion as the echos overlap on each other, from deep in the mix, Nelson delivers lyrics like, “The anthem lost to the clock. Like a watch in pieces on the floor, and I try to fix it fast so I don’t lose too much time. And even precious memories feel more like documentaries of someone else’s life.” The music and the words speak of distance, of removal from an event, and, more than anything else, removal from yourself.

In this sense, Labradford is part of the cinema of everyday life — as in the BIG question that Jason asks Goldie elsewhere in this issue. The best cinematic music has long ago discarded the image. Says Nelson, “There’s sort of like loss of context. It can sometimes make a listening experience really weird. Like I’ve been listening to the End of Violence soundtrack a lot lately, have you heard that? There’s two soundtracks — one with a bunch of songs by like Nick Cave and stuff, and then there’s the score that Ry Cooder did. That’s the one I’ve been listening to. It’s mixed by Howie B, so there’s all these little dub tricks in there with Ry Cooder’s sense of composition and guitar playing. So it’s really cool. Things just come in and out. A little beat thing will happen for like 15 seconds, and there’s no context for it at all. But I’m sure in the movie there’s some sort of reason why that action happened. But I would never think to have such small incidences become of such importance. Without the context of the image, film music is amazing, because it’s like missing a dimension. Do you know what I mean?”

In other words, “Very strange things happen without explanation.”

This entry was posted in Interview, Issue 11, Music. Bookmark the permalink.