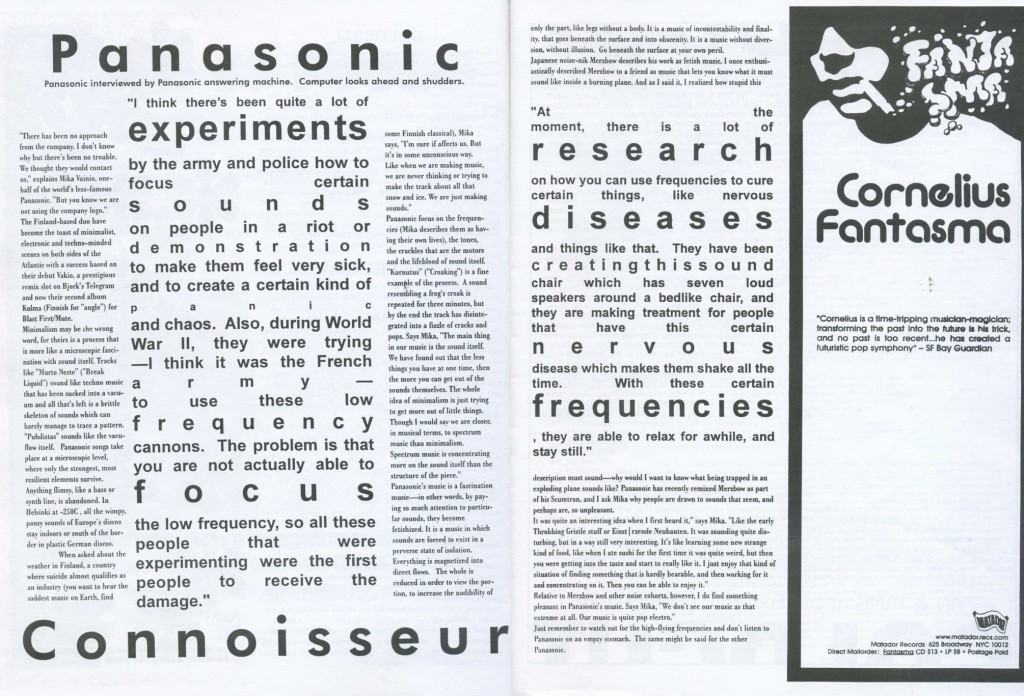 “There has been no approach from the company. I don’t know why but there’s been no trouble. We thought they would contact us,” explains Mika Vainio, one-half of the world’s less-famous Panasonic. “But you know we are not using the company logo.”

The Finland-based duo have become the toast of minimalist, electronic and techno-minded scenes on both sides of the Atlantic with a success based on their debut Vakio, a prestigious remix slot on Bjork’s Telegram and now their second album Kulma (Finnish for “angle”) for Blast First/Mute.

Minimalism may be the wrong word, for theirs is a process that is more like a microscopic fascination with sound itself. Tracks like “Murto Neste” (“Break Liquid”) sound like techno music that has been sucked into a vacuum and all that’s left is a brittle skeleton of sounds which can barely manage to trace a pattern. “Puhdistas” sounds like the vacu-flow itself.   Panasonic songs take place at a microscopic level, where only the strongest, most resilient elements survive. Anything flimsy, like a bass or synth line, is abandoned. In Helsinki at -250C , all the wimpy, pansy sounds of Europe’s discos stay indoors or south of the border in plastic German discos.

When asked about the weather in Finland, a country where suicide almost qualifies as an industry (you want to hear the saddest music on Earth, find some Finnish classical), Mika says, “I’m sure if affects us. But it’s in some unconscious way. Like when we are making music, we are never thinking or trying to make the track about all that snow and ice. We are just making sounds.”

Panasonic focus on the frequencies (Mika describes them as having their own lives), the tones, the crackles that are the motors and the lifeblood of sound itself. “Kurnutus” (“Croaking”) is a fine example of the process.  A sound resembling a frog’s croak is repeated for three minutes, but by the end the track has disintegrated into a fizzle of cracks and pops. Says Mika, “The main thing in our music is the sound itself. We have found out that the less things you have at one time, then the more you can get out of the sounds themselves. The whole idea of minimalism is just trying to get more out of little things. Though I would say we are closer, in musical terms, to spectrum music than minimalism. Spectrum music is concentrating more on the sound itself than the structure of the piece.”

Panasonic’s music is a fascination music—in other words, by paying so much attention to particular sounds, they become fetishized. It is a music in which sounds are forced to exist in a perverse state of isolation.  Everything is magnetized into direct flows.   The whole is reduced in order to view the portion, to increase the audibility of only the part, like legs without a body. It is a music of incontestability and finality, that goes beneath the surface and into obscenity. It is a music without diversion, without illusion.  Go beneath the surface at your own peril.

Japanese noise-nik Merzbow describes his work as fetish music. I once enthusiastically described Merzbow to a friend as music that lets you know what it must sound like inside a burning plane. And as I said it, I realized how stupid this description must sound—why would I want to know what being trapped in an exploding plane sounds like? Panasonic has recently remixed Merzbow as part of his Scumtron, and I ask Mika why people are drawn to sounds that seem, and perhaps are, so unpleasant.

It was quite an interesting idea when I first heard it,” says Mika. “Like the early Throbbing Gristle stuff or Einst|rzende Neubauten. It was sounding quite disturbing, but in a way still very interesting. It’s like learning some new strange kind of food, like when I ate sushi for the first time it was quite weird, but then you were getting into the taste and start to really like it. I just enjoy that kind of situation of finding something that is hardly bearable, and then working for it and concentrating on it. Then you can be able to enjoy it.”

Relative to Merzbow and other noise cohorts, however, I do find something pleasant in Panasonic’s music. Says Mika, “We don’t see our music as that extreme at all. Our music is quite pop electro.”

Just remember to watch out for the high-flying frequencies and don’t listen to Panasonic on an empty stomach.  The same might be said for the other Panasonic.

This entry was posted in Interview, Issue 11. Bookmark the permalink.