Posted on February 11, 2001 by spaceagebachelor 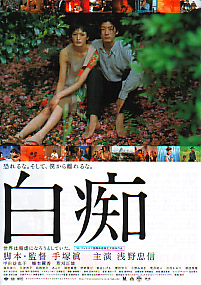 “I am powerless in the face of this pitiful reality,” goes the voiceover of the main character Izawa, halfway through Hakuchi: the Innocent. The camera is low and angled up at him, he walks under the stars, dwelling upon the vast immensity of the galaxy.

“I imagined that the atomic bomb wasn’t dropped, and the war continued for 20 or 30 years,” says Macoto Tezka, the film’s director. “Then, what would Japan be like?” And so, Hakuchi begins with an aerial shot of a fighter jet passing by. The camera pans down, and the war-ravaged landscape of urban Japan is revealed. The film stock is black and white, and has an archival quality. On ground level, still in black and white, the camera hovers over a small child. Dead bodies and rubble all around, the child is reaching out and crying. Then, the scene cuts to color, elsewhere in the rubble – a group of models all dressed in yellow, with cool and aloof expressions, are being positioned for a photo shoot. Cameras flashing. And then edit back to the crying child – a photographer’s getting right in the child’s face, snapping as many photos as possible.

“That first scene symbolizes the whole idea of the movie,” says Tezka. Again and again, the fake world of the media is contrast against the pitiful realities of wartime. “There was a photographer, who won the Pulitzer Prize for this picture of a hawk descending on a small child. But after he became famous, many people asked, ‘Why were you taking this picture, and not helping the child?’ In the end, this photographer committed suicide.”

Although based on a mid-20th Century novella by Ango Sakaguchi (so it’s not to be confused with the Kurosawa film of the same name, which was adapted from a Dostoevsky novel), Hakuchi seems at times like it might be double-functioning as a critique of the media at the beginning of the 21st Century. Izawa, played very subtly, somberly, and soberly by the highly talented Japanese star Tadanobu Asano, works at the Media Station, which he calls, “The shrine of vanity and folly. All that was sinful came out of here, to be consumed by the people.” The Media Station is a huge mass of glass and concrete – rising out of the rubble, it’s as if the surrounding environment has been sucked into its orb, torn from the earth by gravity, as if nothing can live within its sightlines.

The Media Station’s principal commodity is Ginga, not just the nation’s number one idol, she’s more like the war goddess. Every man’s fantasy, every girls dream. A mixture of lavish sets and C.G. wonderlands, Ginga’s stage shows are spectacular. She sings her numbers as if she’s a modern day Cleopatra surrounded by dancers – in one scene, she’s hoisted onto a cylindrical platform, which rises up high above the stage, and suddenly she’s alone singing in this golden environment, with all these cylindrical structures rising around her. Off-stage, she’s a nightmare, her unpredictable behaviour sends shocks down the station’s chain-of-command, making everyone fearful. She says privately, “Men, people, everybody! I want them all dead at my feet. I’ll survive dancing over their dead bodies. Am I crazy?” Asked if Ginga was inspired by any of today’s J-Pop stars, Tezka says, “No. No one is like her. No one is that clever.”

In Hakuchi, C.G. is so deeply embedded that it’s sometimes impossible to know what’s C.G. and what’s real. Tezka’s much renowned for his work in the digital sphere – moreover, he’s breaking ground in a territory that was pioneered by his father, Tezuka Osamu (note that his son changed the spelling of his name). His father is perhaps the most revered of all Japanese manga/anime creators – Astroboy, being his most famous creation. In the Japan Times review of Hakuchi, Mark Schilling writes, “The extravagance of the imagery as well as the grandiosity of the themes (the nature of good and evil, the meaning of existence in a world without values) also derives from the manga of the elder Tezuka, who took what was considered a low amusement for children and shaped it into a medium capable of expressing the whole range of human emotion and thought.” Tezka’s obviously fully aware of the scope of his father’s work – he was even in charge of the construction of a museum devoted to his father – nevertheless, he downplays the father/son relationship, “It’s not so important, because Manga is so deep in the culture, that every Japanese shares this influence. It’s a really natural thing to be influenced by.” In certain scenes, I swear the movie’s reality completely gives way to anime – such as a shot of a full moon interspersed with clouds, and a brilliantly red sunset that both have the perfect color and intensity of anime.

Still, Tezka says, “A CG created character can’t express the emotional range that an actor can. But, for example, in stunt scenes, digital characters can be used.” Nevertheless, I still think that Ginga is the sort of dangerous femme fatale, like many Japanese pop idols, that owes her tricks and style more to anime babes than anyone living. The actress that plays her, Reika Hahimoto (a Japanese model in her first acting role), does the job brilliantly, so I wouldn’t want to see her phased out of the movie – but I’m left thinking that Ginga should have been C.G. in some scenes, and human in others. Effectively, in 1996, Tezka produced a character called “TEO” – ‘computer software for the next generation in artificial life forms.’

But analogue is good for the soul, isn’t it?

“I was sick of the fake world of TV,” says Izawa, when one day he walks through the ruins, filming people. In his days before working at the Media Station, he was a student filmmaker. He made a film that was all about the wind – all kinds of different things dancing in the brilliant warmth of the sun. In the apocalpytic landscapes, or rather wastelands, of Hakuchi, Izawa’s 8 mm film is a treasure, an oasis of purity – the antitheses of the vile commercialism of the Media Station. During the final airraid, Izawa ventures out into the flames, film camera in hand to make his last movie. He films his feeble-minded girlfriend, the innocent of the movie’s title, who is reaching out for his hand, with a lost, bewildered look in her eyes – and then, Izawa does the right thing – he chucks the camera into the flames, and reaches out to her.

“To protect his love. To survive. To live.”

Says Tezka, “In the near future, digital will be more common, but I don’t think everything will be digital. Analogue and traditional techniques are going to mix with digital to get the best of both worlds. For example, in this movie, in the final fire scene, it’s the real set and it’s really burning down – but we use C.G. effects to make it look more intense.” To make it look more real, he might have said. He continues, “In the real fire, the actors felt real fear.”

Anyway, so much for the advantages of digital’s non-destructive editing capabilities. Once you’ve burned down the set, I guess you know that the production of the movie is over. The point of no return is passed.

(for further information on director Tezka Osamu – check out www.neontetra.co.jp)

This entry was posted in Film, Hakuchi, Interview, Issue Post. Bookmark the permalink.